Ecommerce platform Zalando launched Vizions, the first platform conference in Europe, on April 20 in Berlin. The event attracted over 1350 participants and was held in Kraftwerk, a place with an industrial vibe typical to the city of Berlin.

The conference brought together platform international thought leaders (some of the most notable being Christoph Weigler, General Manager DE at Uber, Japjit Tulsi, VP Engineering at Ebay and Dr Guo Dongbai, CTO at Ali Express). Zalando’s goal was to encourage the European economy to counter the US-driven “GAFA” (Google, Amazon, Facebook, Apple) economy.

To underline the importance of women in the IT industry, Zalando gave the floor for the opening panel to Natalia Brzezinski, CEO at Symposium Stockholm and Cindy Gallop, CEO at Make Love not Porn. Inspired choice, as the panel was entertaining and filled with refreshing and bold advice: Want a successful business? Don’t have a business model, instead find the best talent, hire them and give them a vision. In the ecommerce industry, women are the decision-makers. It is in their nature to buy and then to share. When it comes to purchases, women influence men more than men influence men.

In terms of organization, the conference was stellar. Zalando set out to disrupt the idea of a conference and they managed to do it. There was no official lunch break, but rather food stalls available around the clock, allowing participants to get maximum benefit from the sessions. With its fantastic lighting and stage design, the location felt more like a club than a typical (boring) conference location. 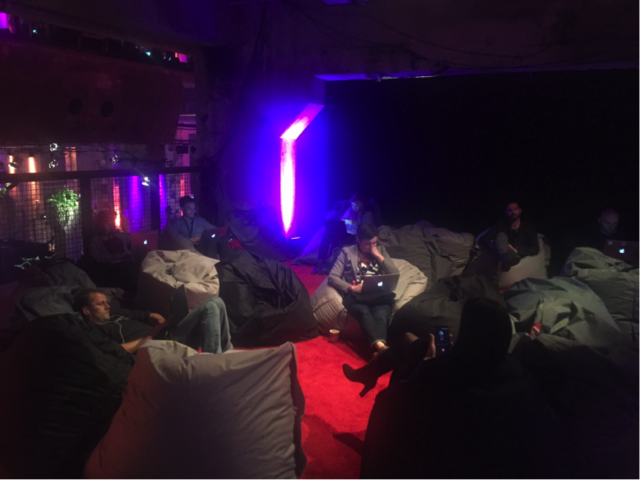 If you’ve ever been to a conference, you know that one of the most common problems is running out of batteries. Power stations were located at every corner to prevent this from happening. Throughout the locaton there was organized space to work (desks, tables, chairs), relax (beanbags) or recharge.

What were Zalando’s goals in hosting the conference? Apart from providing knowledge to the community and boosting the European economy, the company is still trying to improve its image as an employer, following a 2014 report on poor working conditions by German TV channel ZDF. Working at Zalando has since improved considerably. Employees receive more and more perks (from the food court to insurances, as well as 40% discount vouchers).

Zalando is much more then an ecommerce platform: They are a tech company and with all the tech talent (software engineers, developers and UX experts) they are employing, they are changing the game. The company also works with guilds (Scala, APIs, Clojure, Open Source), similar to how we do it at SwissQ, only that we call them Zunfte. Guilds let employees bring their own ideas into the company and empower them to take immediate action to change their working environment.

As proof of how talented and multi-skilled the people at Zalando are, Vizions was organized internally, bringing together people from different departments to create an impressive result.

What can be improved?

When it comes to organizing an event, it’s important to make sure that your audience is clearly defined. It is beneficial that people meet relevant peers. When the scope is too wide, it becomes harder for participants to relate to one another. And although it’s always fun to meet people from other industries and professions, without a common thread, networking might lack efficiency.

Panel discussions are a great way to keep the audience entertained, get more people on stage to share their opinions and spark a healthy debate. But what happens when all the presentations become panels? Participants miss out on the content they were hoping for and the overall impression is that speakers didn’t do their “homework”.

Being a great speaker isn’t an easy task. Although many possess the knowledge and experience necessary, conveying their messages to the public can be a tricky task. Good speakers deliver their speech clearly, without reading from a sheet of paper. Preparing for a presentation may take days or weeks, but the audience always deserves the best.

No matter where you are located, conferences are a great opportunity for learning and networking. The insights you get from different companies and industries on one day can translate into weeks or even months of knowledge. Check out the next SwissQ conferences and get out of the office for a session of innovation, inspiration and good mood! Coming up in 2017 are: Agile Leadership Day and Product Management Festival.